The Zero Story - Division by zero

The Zero Story - Division by zero

Today, we'll look at the vexing question - what does it really mean to divide by zero? Why does it result in concepts like "undefined" or "infinity"?
To answer this, we'll first need to understand what "0" really is. So let's go find out the history of the concept "zero".

At first glance, "zero" represents the concept of nothingness - indeed the name "zero" itself came from the Arabic word "Sifr", which in turn came from the Sanskrit word "Shunya", meaning nothingness.

But Zero is much more than just nothingness. The concept of zero is one of the linchpins on which all modern mathematics, and by consequence, our understanding of the universe, rests.

Let's take a brief look at history. You've studied the Roman number system - it's functional, but a bit clumsy. Adding and multiplication are just plain hard in that system, not to mention that writing down large numbers could be even harder. And there was nothing like "zero" in there. The good part was that it was a decimal system. The Sumerians and the Mesopotamians had more sophisticated number systems, but their system was a base-60 one (the decimal system is a base-10 system). The interesting part about their system was that it was a positional one, the value of a "digit" depended on its position in the number (same as both 5000 and 50 have the same digit "5", but it's value depends on the position of the digit in the number - the same 5 has a much larger value in the first number than in the second one). And in this system, they also had a symbol that indicated the positional zero - a symbol that indicated that the number had no value at that position. So they did have a notional representation of zero.

But it was the Hindu mathematicians of ancient India who really came up with a concrete and comprehensive meaning of zero as a concept, as a digit, and a condition, and a limit, and as nullity, in the works of mathematicians like Aryabhatta, Bhaskara, Brahmagupta, Mahavira and others. The concept and the symbol is likely to have traveled from the Mesopotamians via the Greeks to India, but it was mathematicians like them who began to use it to derive beautiful results and techniques in mathematics - in effect, moving it from a descriptive placeholder to a central mathematical symbol.

As an aside, the photo below shows the oldest known representation of the number "0" to be found in India - this is in the ChaturBhuja temple in Gwalior, and the inscriptions dates from 876 AD. 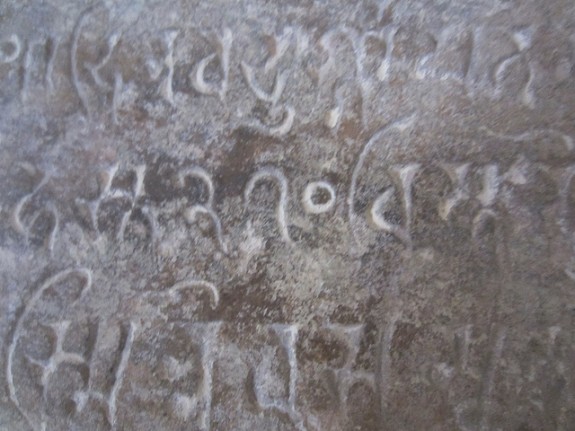 So why are we mentioning that here? It is because it was the mathematician Bhaskara II ( 1114-1185 AD) who came up with the first correct explanation of what division by zero means in his book Lilavati. Before him, Brahmagupta was the one who started working with 0 as a separate number, and tried to define operations using 0.

So let us return to the question we started out with. Given that "0" signifies nothingness, what does the concept of dividing something by 0 mean?

Unlike what some of us were taught, dividing a number by zero (for example 15/0) does not give the result of "infinity".

15/0  (or 1/0) or any number divided by zero) is actually undefined. The exception is , which is indeterminate.

What do we mean by this?

Let us go back to the basics of division, and look at it in terms of the physical meaning. Taking a problem that you all had encountered in elementary school - If you have 10 pencils, and had to distribute it among 5 friends, how many pencils will you give to each friend?

The meaning of divide here is to "distribute equally", but it is more than that. It is to distribute equally into separate groups. You should be able to distribute these into a different groups so that each group has equal number of the item (be it a pencil, or just an abstract number) at the end of the operation. And the number of groups distributed into is defined by the denominator in the division operation.

So, in this example above 10/5  meant, you distribute the 10 pencils (specified in the numerator) objects equally to the group of 5 friends (specified in the denominator), we get the answer that each gets 2 pencils. The correctness of the operation can be verified by two things

Everything is wrapped up and consistent.

Let's consider it in terms of our previous problem on division. You have 10 pencils, and have to distribute it among "0" friends. Just imagine the scene in your head.

There you are standing with 10 pencils, ready to distribute it, but there's a problem. There's no one, or "0" friends,  you can distribute it to.

Now you see that you cannot be solved, because the operation required of you just cannot be completed. This is also the reason we say that dividing a number by 0 is undefined.

The other aspect is 0/0. We can't even define this in physical terms (It would be rather strange to say that you have no pencils and no one to distribute it to. One would be tempted to ask why you are standing there at all with nothing to do and no one to do it with). So let's look at it from a logical sense

This is why we say 0/0  is indeterminate - it cannot be uniquely determined.

Now that that part is settled, things do get a little more complex. You see, what we stated above for division by 0 is true only for elementary mathematics (which is the stuff you've been learning in primary and middle school). In more advanced subjects like calculus, the concept of limits comes in, and we can then start to treat division by 0 differently. Then come more advanced mathematical areas like Abstract Algebra and Riemannian Geometry where there are other interpretations of division by zero.

But that's a lesson for another day.